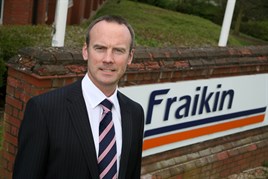 Companies are increasingly handing the entire management of their vehicle fleets over to outside contractors in order to concentrate on their core businesses, according to a leading industry figure.

The trend has intensified during the economic downturn as businesses focus on the activities which give them a leading edge in their fields, rather than trying to become an expert in all of the support services they require, says Fraikin.

Often considerable cost savings, efficiencies and improvements in service can be suggested by outside providers who can draw on extensive experience amassed by providing particular services to a range of customers.

During difficult economic times having the assurance of fixed costs for support services is also an attraction for many businesses looking to set achievable budgets for the year ahead.

“Our job is to save our customers money,” said Peter Backhouse (pictured), chief executive officer of Fraikin.

”It’s not always about suggesting they can run their fleets with fewer vehicles and drivers, sometimes they can make savings by operating vehicles in different cycles, or by adopting new technologies.

“We can learn from an experience with one customer and see how to apply that in a different setting to deliver cost savings for another customer.”

Fraikin has increased its fleet management sales by more than 8,000 vehicles in the past 12 months alone, winning contracts from customers who have previously managed their fleets in-house. Among those making the big cultural shift of out-sourcing fleet management are Cartwright, Scottish Power and Sainsbury.

The Cartwright Group has handed over the management of its entire fleet of 4,400 trucks and Fraikin has taken over its former workshop at Wythenshawe, Manchester. Sainsbury has awarded a four-year contract to manage 220 home delivery 3.5 tonne vans in the South East.

“Fleet management goes beyond just maintaining vehicles,” said Backhouse. “It goes right through to providing information management around the vehicle, providing all the other aspects of making the vehicle cost effective for the customer.”