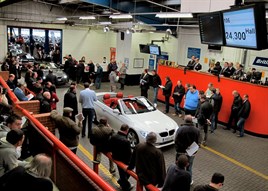 Over 500 convertibles were sold at the two auction centres, generating a turnover of £4.5 million pounds and an average value of nearly £9,000.

The event combined physical bidding, Live Online and a special ‘Bid Now’ online auction. Each sale was also streamed live via LCD screens into the alternate location, allowing buyers in one venue to bid in real time on cars being sold in the other.

Over 400 buyers registered for the sales at the two locations, with a further 502 Live Online bidders participating via their PCs, laptops and mobile devices. Fifty per cent of the cars (252) were sold to Live Online buyers, representing a value of £2.25 million. Overall performance exceeded 103% of CAP Clean.

Both sales were open to the public, and every convertible offered was covered by the BCA Assured programme, giving peace of mind to buyers by providing a report on a 30 point mechanical check carried out by an independent motoring organisation.

Robert Sturley, southern area auction manager for Lex Autolease, said: “To sell over 500 convertibles in one day would be an achievement at any time, and BCA pulled out all the stops to deliver a first class result.

“The sales programme was well supported and the buying power was exceptional at both locations and online, generating an average value of nearly £9,000.”