Future of vehicle auctions is mix of ‘bricks and clicks’ 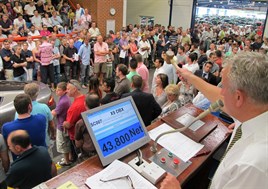 The UK’s two biggest car and van auction houses are selling an increasing number of vehicles through online platforms.

Manheim has sold 19% more vehicles online this year than in the same period last year and had sold more online by October 2011 than in the whole of 2010. It expects online purchases to become more than 30% of fleet auction sales within the next few years.

However, both companies insist the growth in online sales will not erode the role of physical auction sites.

BCA’s commercial director d’Vidis Jacobs said: “To link the reduction in general market volume to a rise in online sales and thereby a presumed reduction in physical sales is misleading. The market is currently operating at lower level caused by the drop in fleet registrations from 2008 onwards.

“Every indication is that these volumes will return as economic conditions inevitably improve and, with it, the need for physical auction infrastructure to handle these volumes.”

Chris Cush, commercial director at Manheim Remarketing, added: “You need a ‘bricks and clicks’ business model to survive and to support your customers.”

Manheim now offers Simulcast (a simultaneous internet broadcast of a physical auction); CyberAuctions which are online only; an eBay-style e-Auction; and a Buy Now wholesale trade channel.

Manheim, which typically sells 40% of its 500,000 vehicles annually on behalf of fleets, puts 90% of stock on Simulcast and says that although it is not yet a mature product, customer comfort with the technology is growing rapidly and it is becoming a standard part of buyers’ repertoire. It says that 40% of its overall buyer base has bought through Simulcast and buyers are increasing by 20% each month.

For fleets looking to dispose of vehicles there are two key elements; a wider available market and evidence that this translates to higher prices.

Although neither BCA nor Manheim believes buyers will stop using their regional auction centres, they are aware that the lack of good used stock in the market is prompting dealers to look further afield for vehicles, particularly when they are buying to order.

“Online sales widen the buyer base,” said Jacobs. “Online buyers can only have a positive effect on residual values and time to sale.

“On average £187.50 is added to the value of every vehicle sold to a LiveOnline bidder.”

Cush explained: “The Lex Autolease mega sale at Manheim Auctions Colchester in late 2011 attracted a record 425 buyers to the site with a further record-breaking 661 buyers bidding online. Online buyers logged on from Gateshead, Belfast, Perth, Swansea and Taunton as well as mainland Europe and Ireland.”

Online and electronic bidding work best in harmony, an idea which is underlined by the companies’ staunch defence of the future of their physical sites.

“There are no plans to reduce the BCA physical auction footprint,” said Jacobs.

Manheim has re-evaluated its physical auction sites, merging two centres into one at Bruntingthorpe, closing its Middlesbrough outlet and opening one in Coventry.

Meanwhile, BCA confirmed in January that it was transferring business from its centres in Newport and Tewkesbury to the supercentre at Bridgwater just off Junction 23 of the M5.