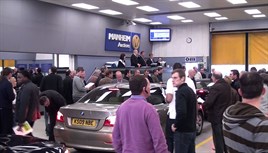 A record £14 million of cars were sold making it the biggest ever sale and the highest value of stock sold for a single manufacturer vendor outside of the USA in a single day.

On offer to buyers was a variety of stock from nearly new ex-management vehicles through to the more traditional fleet cars from BMW Financial Services Group and Alphabet UK.

Very lively bidding across all four lanes and online via Simulcast resulted in some strong values being achieved against the March CAP values.

The sale attracted 484 buyers to the Colchester site with a further record-breaking 623 buyers bidding online via Simulcast across the four lanes.

Within the buyer base there were 137 buyers representing or buying for 73% of the BMW franchised dealer market.

Online buyers logged on from as far away in the UK as Devon, Middlesbrough, Manchester, Scotland and Northern Ireland as well as further afield in mainland Europe, Turkey, Malta and Ireland, while 10% of the vehicles were sold online via Simulcast and 236 franchised dealers and Manheim Account holders purchased cars on the day.

The auction centre embraced the BMW Group brand for the day from the welcome at reception to point of sale information. The BMW and MINI franchised dealers also had exclusive access to a VIP area during the day.

Matt Bristow, general manager of Used Cars at BMW Group UK, said: “The unique four lane layout at Colchester was a perfect setting for this sale.

“It enabled us to easily differentiate the stock profile by lane to best match our buyers’ needs. The buyer attendance was outstanding both physically in the hall and online through Simulcast and I am delighted with the commitment shown by the network in its support for the auction.

“The figures achieved on the day exceeded our expectations and prove that despite the current economic climate the market for BMW Group product remains buoyant and the positive mood amongst the network suggests that there is growing confidence in the level of consumer demand.”

James Leese, manufacturing sales director at Manheim, added: “Manheim has once again set the benchmark by delivering its biggest ever sale in the UK in terms of value sold and attendees.

“This helps reinforce its unique position as the only UK remarketing organisation capable of delivering a sale of this scale and magnitude in a four-lane environment.

“BMW Group delivered an outstanding proposition to buyers with the BMW and MINI stock complemented by high quality multi-make fleet cars from Alphabet.

“The sales results and calibre of attendance support Manheim’s reputation as the leading choice for the UK’s leading vendors and round-off a very positive and strong first quarter for 2012.”