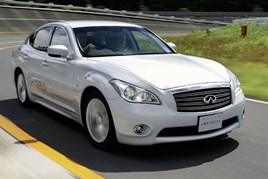 Infiniti has made improvements to its hybrid model, which enable it to slip below an important emissions threshold in the corporate sales market.

The Infiniti M35h was launched in the UK in September 2011, and achieved 162g/km, but the latest version on display at the Geneva Motor Show had CO2 emissions of 159g/km.

This puts it below the point where a car is eligible for a 20% writing down allowance rather than 10%, allowing outright purchase fleets to write off its value against tax much sooner.

Infiniti sales director Tony Lewis told Fleet News: “Business users had been interested in the hybrid and we have now sold out of the 162g/km cars, with 159g/km cars now being delivered.”

The Infiniti M35h uses a 3.5-litre V6 petrol engine with an electric motor and is currently the UK's fastest accelerating hybrid.

The reduction in CO2 emissions has been achieved through modifications to the software to allow the electric motor to assist the engine more while it’s cold.

Insiders say this was preferred to using narrower tyres or smaller wheels to achieve the reduction.

However, later this year it will face competition from a hybrid version of the BMW 5 Series – the ActiveHybrid 5 – as well as a new Lexus GS450h.