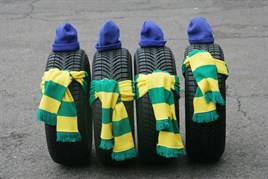 Despite what felt like a relatively mild winter for much of the UK, detailed weather analysis from ATS Euromaster has shown that temperatures dropped below seven degrees Celsius during prime commuting hours on 147 separate days between October 1, 2011 and March 31, 2012.

The statistics, which have been provided by the Met Office, cover temperatures in 10 major UK cities from 7am till 9am and 4pm till 6pm.

The information comes as ATS Euromaster has announced an initial order for more than £10 million worth of car and van cold weather tyre stocks for winter 2012/2013. Cold weather tyres offer improved grip, handling, cornering and reduced braking distances when the temperature drops below seven degrees Celsius.

Peter Fairlie, group dales director at ATS Euromaster, said: “Although we didn’t see a great deal of snow during this period, these statistics highlight that cold weather tyres are still a valuable safety feature worth having, even during a mild UK winter.”

Of the 10 cities studied, Newcastle upon Tyne recorded the highest number of days where temperatures dropped below the seven degree Celsius threshold with 129. Leeds had the second highest number with 122, just ahead of the Scottish cities of Aberdeen and Glasgow, which registered 118 days and 117 days respectively.

Liverpool was the city with the fewest days below seven degrees Celsius at 78, with London just behind: registering 80 days. Other cities analysed included Cardiff, Edinburgh, Belfast and Birmingham.

The month with the highest average number of days recorded below seven degrees Celsius during primary commuting times was January 2012, with more than 25 days. December 2011 was the second highest with 24 days, while October was the lowest with an average of just six days below the threshold.

Corresponding data from winter 2010/2011 highlights the harsher winter experienced in the UK.

Temperatures dropped below seven degrees Celsius during prime commuting hours on 169 separate days, meaning the UK only experienced 13 days over the six month period where cold weather tyres wouldn’t have delivered benefits in at least one region of the UK during commuting hours.

Modern rubber compound technology and advances in tread pattern design mean that today’s cold weather tyres deliver shorter stopping distances for cars and vans on both wet and dry roads at low temperatures, as well as on snow, slush and ice.