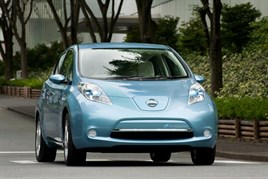 Nissan in Norway has sold 1,000 Nissan Leafs in just six months, taking almost 2% of the total car market in February, which the manufacturer says demonstrates the impact of comprehensive incentives and a developed charging infrastructure.

Norway has the highest level of support in Europe for electric vehicle purchases with zero VAT, no new car tax, free parking, exemption from some tolls and the use of bus lanes in Oslo. The existing on-street charging infrastructure in Oslo currently has approximately 3,500 public charging points, many of them free to use.

Olivier Paturet, general manager of Zero Emission Strategy at Nissan Europe, said: "We are very happy to see that the ambition of the Norwegian government has matched our own with strong support for the widespread introduction of electric vehicles.

“The Norwegian package of incentives is unsurpassed and the recharging infrastructure is established and accessible.

“We can see that Norway is leading the way with its proactive approach to encouraging its citizens to drive electric vehicles. We hope it will continue with the further development and upgrading of the charging infrastructure."