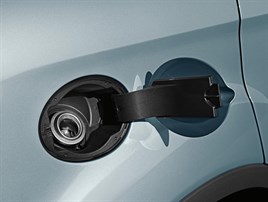 Ford’s Easy Fuel system which prevents the expensive mistake of misfuelling is also proving a deterrent to petrol and diesel thieves, according to the company.

The escalating value of fuel has led to thefts from vehicles increasing by 25% in the past year to a reported 4,500 cases in the UK annually.

"Our novel Easy Fuel feature ensures that Ford owners put the right fuel in their car,” said Andy Barratt, Ford of Britain sales director. “Another customer benefit is that it acts as a deterrent by slowing down the fuel thief.”

The technology behind Easy Fuel adds extra layers of security behind the external fuel filler opening, which is anyway secured as part of the vehicle’s central locking, to inhibit forced entry and syphoning.

The inhibitor consists of a fuel nozzle detector that guides the nozzle to the opening. If a nozzle or foreign tube of a different size – a diesel nozzle or plastic hose, for example – is placed in the filler neck of a petrol-powered vehicle, the latches will not release. For a diesel-powered vehicle, the inhibitor will keep out the smaller nozzles.

Another deterrent in Ford vehicles stems from its refuelling vapour recovery system. The purpose is to prevent vapours from escaping during fuelling, but syphoning efforts are also thwarted because it closes automatically after the process starts by detecting the pressure of liquid fuel as it passes.