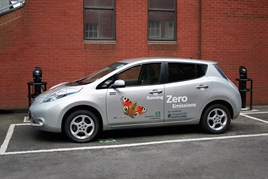 Four local authorities in Scotland are now using the 100% electric Nissan Leaf after Transport Scotland offered a grant for the public sector to meet the initial cost.

The four Scottish authorities that have invested in a total of 12 Nissan Leafs are NHS Tayside, Dundee City Council, Perth & Kinross Council and Dumfries and Galloway Council.

NHS Tayside will be running two Nissan Leafs for its health professionals. Sustainability champion and chairman of NHS Tayside Sandy Watson said: “Last year NHS Tayside spent over half a million pounds on fuel for its fleet of vehicles and money we save on fuel will could go towards other healthcare priorities.

“The timely delivery of these two new electric vehicles will help towards reducing NHS Tayside’s emissions as they create less pollution than petrol or diesel powered cars, and are an environmentally-friendly alternative, as well as being cost-effective.”

Over in Dundee, employees at the City Council are now using four Nissan Leafs which make up part of its car pool scheme and 20 miles away in Perth & Kinross, the council has also added four Leafs to its pool car fleet.

Bill Morton, Perth & Kinross Council’s fleet manager said: “The decision to invest in the Nissan Leaf has been crucial towards helping us meet our aims to reduce carbon emissions and improve air quality.”

Further south in Dumfries and Galloway, an additional two Leafs have been added to the council’s pool car fleet. The council was the first in the UK to have a LEAF to its fleet last year and already has two charging points installed on its properties and is in the process of installing a further four.

In addition to these, the council has committed to install a further 10 public charging points across the city including one rapid charger.