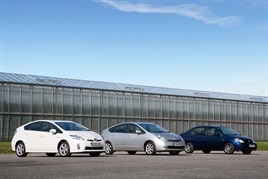 Sales of the Prius began in Europe, North America and elsewhere in 2000. The second generation Toyota Prius was launched in 2003 at which point the company expanded the use of its full hybrid technology to vehicles such as minivans, SUV's, luxury saloons and family hatchbacks. The third-generation Prius launched in May 2009 lead to global cumulative sales of Toyota hybrid vehicles topping 3 million vehicles by the end of February, 2011.

As Toyota's hybrid range expanded so came localised production such as the UK built Toyota Auris Hybrid and upcoming Toyota Yaris Hybrid which will be built in France. Later this year, the range will appeal to an even wider audience with the launch of the seven seat Prius+ and Prius Plug-in Hybrid.

Toyota estimates its full hybrid vehicles have led to a saving of approximately 26 million tonnes in CO2 emissions compared to what would have been emitted by petrol or diesel powered vehicles of similar size and driving performance.

Having positioned hybrid as a key technology, Toyota plans to continue working to further raise performance, reduce costs, and expand its product line-up, including that of non-hybrid environment-friendly vehicles, to create vehicles that are popular with consumers.