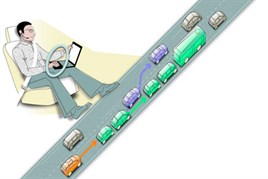 Volvo has completed the first test of a train of vehicles driving automatically in convoy behind a lead vehicle on a public road.

The test, on a motorway outside Barcelona, saw a vehicle platoon in the SARTRE (Safe Road Trains for the Environment) project take place among other road users.

One lead vehicle and four trailing vehicles - consisting of a Volvo S60, a Volvo V60 and a Volvo XC60 plus a truck - made up the road train.

"Driving among other road-users is a great milestone in our project. It was truly thrilling," says Linda Wahlström, project manager for the SARTRE project at Volvo Car Corporation.

The vehicles drove at 85 kilometres an hour. The gap between each vehicle was just six metres.

The project aims to deliver improved comfort for drivers, who can now spend their time doing other things while driving, such as work on their laptops, read a book or eat.

The project will now focus on analysis of fuel consumption.

A road train consists of a lead vehicle driven by a professional driver followed by a number of vehicles.

Building on Volvo Car Corporation's and Volvo Technology's already existing safety systems - including features such as cameras, radar and laser sensors - the vehicles monitor the lead vehicle and also other vehicles in their immediate vicinity.

By adding in wireless communication, the vehicles in the platoon "mimic" the lead vehicle using Ricardo autonomous control - accelerating, braking and turning in exactly the same way as the leader.