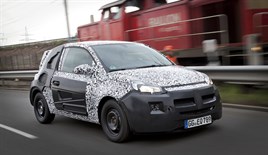 Vauxhall has confirmed the name of its new upmarket city car, which until now was known only by its code-name Junior.

Christened 'Adam', Vauxhall's new small car - five doors, four seats - is expected to be a direct rival to the popular Fiat 500, Mini and Peugeot 107. The Adam will include a range of efficient petrol engines and prices are expected to start from £10,000 OTR.

Although the city car segment is not a big seller in fleet, Vauxhall believes the Adam will attract user-choosers.

Insiders say major emphasis will be put on the ability to personalise the car, with a wide range of colours both interior and exterior, in addition to a number of other features where buyers can make their Adam unique.

"It will be bursting with personality," said one. "This will be a game-changer for the brand."

Described to Fleet News last year by Alain Visser, then GM vice president, sales, marketing & aftersales Europe, as an “iPod on wheels”, the Adam will be officially unveiled at the Paris motor show in September. It is due to go on sale shortly afterwards.

“It is a trendy car, but not a cheap car,” said Visser, now Global Marketing Vice President at sister brand Chevrolet.

“It will be a premium small car that will have potential with user-choosers. This is the fastest growing segment in Europe.”

Confirmation on pricing and specification will be released closer to the launch.