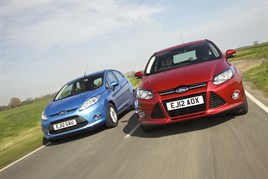 UK market leader Ford benefitted from a surge in commercial vehicle (CV) sales in May to ensure that its total vehicle sales and share were up for both the month and for the year-to-date compared with 2011.

Ford car sales were up by 7% in May, compared with May 2011, while the car market as a whole was up 7.9%, according to the official figures released by the Society of Motor Manufacturers and Traders (SMMT).

The official figures released by the SMMT show that total car sales in May were up 7.9 per cent to 162,288 units, compared with May 2011.

Ford's strong performance in car sales through 2012 is underlined by the Ford Fiesta's number one ranking in the UK market. Sales for the year-to-date have increased from 42,814 to 50,507, compared with the same period in 2011.

After slow sales from January through April, the UK light commercial vehicle and medium commercial vehicle segments picked up significantly in May with sales up 11%, compared with May 2011. Ford's combined sales in these segments were up 32.3% in May, increasing to 7,178 from 5,425 in May 2011.

Ford medium commercials, headed by the industry-leading Ford Transit, accounted for 31.3% of sales in that segment for the year to date, up from 28.2% in 2011.

Ford Transit's position as the UK's best-selling commercial vehicle remains unchallenged: Transit sales were up in May, increasing from 4,426 to 5,880, compared with May 2011.

Mark Ovenden, Ford of Britain managing director, said: "The strong sales momentum Ford's car range through 2012 is now being matched by our commercial vehicles, with the notable recovery in that sector in May.

"The combination of our best-ever product range of vehicles and an unmatched UK dealer network positions Ford as the clear market leader.

“With the new 1.0-litre EcoBoost engine in Focus proving a big hit and taking 25% of Focus orders, we are looking forward to even more exciting new product news this year with the launches of the Focus ST, the new Ford B-MAX, and the new Ford Transit."