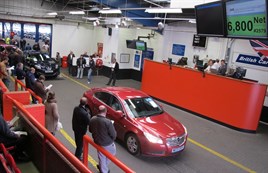 New price data from BCA shows that while volume diesel cars continue to enjoy a substantial average price premium over petrol in the wholesale market, their retained value is actually lower over a forty month cycle.

BCA suggests this should provide food for thought for the wider industry at a time when new diesel registrations by fleets and businesses are at record levels.

Typically the average used fleet and lease diesel model sells for up to £1,500 more than the average petrol car, broadly equivalent to a 25% premium.

However, in terms of retained value compared to MRP (Manufacturer’s Retail Price), fleet diesel cars average around 36%, compared to nearly 39% for petrol cars.

Some of this is undoubtedly down to the sharp divergence in the average mileage covered during that time.

For petrol cars it is around 30,000 miles, for diesel cars the average is nearly double that figure. But with average diesel MRP being around £4,500 higher than the equivalent petrol MRP, this tips the scales in petrol’s favour.

Tony Gannon, BCA communications director, said: “There can be little argument that the average price of a diesel car always outperforms that of a similar average petrol model.

“Research from BCA’s Pulse report shows there is a clear and significant difference in average value at remarketing time – rarely less than £1,200 and peaking at £1,553 in October last year, which was equivalent to a 31.9% variance.

“However, when looking at the retained value over the typical 40-month working life of a volume fleet & lease car, the petrol car – perhaps surprisingly – is the stronger performer by some three percentage points. Of course, the mileage factor is important, but then diesels are purchased with that higher mileage factored into the overall running costs.”

With new diesel registrations running at over 50% of the total market for the first time on record and rising, there are nearly a million new diesel cars entering the market every year.

Gannon added: “Clearly, fleet operators have a much greater appetite for diesels than the private sector.

“While diesels accounted for nearly two-thirds (63.2%) of new cars sold to the 25-plus fleet sector in 2011, they represented just 36.6% of new diesels sold to private new car buyers.

“Many of the diesels purchased by fleets are high specification, high value executive models, but is that what motorists want – or can afford – in the current economic conditions?”