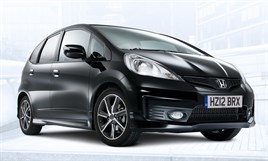 Honda is releasing a limited edition version of the Jazz, which could boost its appeal with younger drivers.

The Si is based on the 1.4 ES manual variant, but with additional sports-inspired features. It has front and rear sport bumpers and side skirts, as well as 16-inch alloys. It also has privacy glass, front fog lights and Si branding on the boot, to highlight the car’s sportier specification.

Revised suspension settings have been adopted, with new dampers combined with a larger front anti-roll bar to improve straight-line stability and body control.

The electric power-steering system has also been modified for improved feel and response, as well as retaining the car's easy-to-drive character.

A Si-T version is also available for £15,545 (OTR) and benefits from the addition of SD navigation and integrated Bluetooth.