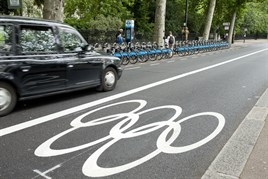 Transport for London (TfL) today confirmed that the Olympic Route Network (ORN) will end operation and enforcement at midnight on Tuesday (August 14) when the vast majority of athletes, officials and media will have departed the UK following an extraordinary Olympic Games.

Roads will return to normal between the Olympic and Paralympic Games.

The 109-mile ORN, which includes 30 miles of Games lanes in London, has ensured all athletes, officials and the world’s media got to their events on time and helped to keep London moving.

ORN measures including stopping and parking restrictions end at midnight on Tuesday. All Games lanes will be taken out of use overnight ahead of Wednesday morning’s rush hour, although all white line road markings will take a little longer to remove.

All physical measures on the ORN will be removed by the morning of Thursday, 16 August.

Before the Olympic Games began the Mayor and TfL committed to operating Games lanes flexibly and opening them up to all traffic when demand from Games vehicles was low.

Throughout the Olympic Games, only around 40% of Games lanes were in operation at any one time, meaning the remaining 60 per cent were open to general traffic with motorists advised via roadside Variable Message Signs (VMS).

By Tuesday (7 August), 10% of Games lanes had already been decommissioned on the ORN routes serving Wimbledon, Lords and the Royal Artillery Barracks following the end of events at those venues.

On Sunday 12 August the Games lanes on the A40, A406 North Circular and A12 were taken decommissioned and by the morning of Wednesday 15 August all Games lanes will have been taken out of use.

LOCOG have also started to de-commission closed competition venues. These works, such as at Horse Guards Parade, are continuing.

The associated local area traffic management and security arrangements will be removed from this week onwards. Where Venues are required for the Paralympic Games, some measures are being retained such as parking arrangements for Greenwich Venues.

TfL today also set out plans for the build and implementation of the Paralympic Route Network (PRN), also necessary to ensure all athletes, officials and the world’s media can get to events on time during the Paralympics.

The PRN is considerably smaller than the ORN and is focused on the east of London. It will have only 8.7 miles of Games lanes on the routes between the City of London, where the International Paralympic Committee (IPC) will be based, the Olympic Park and other venues, including Excel, the North Greenwich Arena, Greenwich Park and Royal Artillery Barracks.

The physical build of the PRN will begin overnight on Saturday 25 August, but it will not come into operation until 06.00 on Wednesday 29 August, the opening day of the Paralympic Games.

The PRN and Games lanes will end operation and enforcement one day after the end of the Paralympics at midnight 10 September, to aid the efficient departure of athletes, officials and media.

The Temporary Road Changes planning tool on the GetAheadoftheGames.com website includes all of the information motorists, cyclists and pedestrians need to plan their road journeys during the Games, including details of the PRN, LOCOG's local parking and traffic management plans.

See this week’s Fleet News for industry reaction to Games traffic plans and how fleets coped during the London 2012.