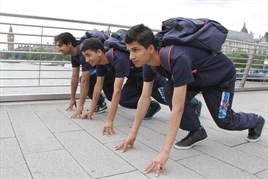 Patrick Gallagher, CEO of CitySprint, said: “Our contingency planning has been very effective in mitigating traffic hot spots in central London, with our expanded fleet of joggers and rollerbladers assisting us to circumvent the road closures.

“We spent months planning, so it’s great that our preparations are now paying off and helping us maintain high levels of customer service.

“For us, the biggest challenge has been not knowing what to expect. An event of this size is unprecedented in London, so, along with all other businesses, it’s been a steep learning curve for us. That said, our staff have been doing a great job.”

Meanwhile, DHL Express has hired more than 100 new employees to make sure deliveries to businesses across London aren’t disrupted.

It appointed a fleet of running couriers through a partnership with distribution company JogPost.

Being able to easily manoeuvre through the city on foot, by public transport or by supporting DHL drivers by springing into action once they hit traffic, the running team has helped ensure deliveries have continued. They and the drivers have been co-ordinated via DHL’s dedicated operations control centre, designed to make sure staff have up-to-the-minute traffic information allowing them to re-route as and when congestion occurs.

Francis Ktenidis, senior director UK operations, programmes and performance at DHL, said: “Operations have so far run smoothly well, but this has undoubtedly come as a result of our extensive planning and the workarounds we’ve put in place for customers.

“However, we’re not going to take our eye off the ball. Major disruption could still occur, but we’ve pre-empted this and believe we have the processes in place to ensure we can manage an issue as and when it arrives.”

Ktenidis continued: “Despite the congestion, we’ve been able to plan and instigate strategic contingency plans to facilitate business as normal. Our staff have shown real diligence, remaining constantly aware of the issues being faced and doing all they can to ensure business’ deliveries keep moving.”