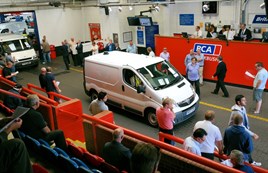 Average used LCV values fell by £154 (3.6%) to £4,075 in August compared to July, although year-on-year figures remained ahead, according to BCA’s latest Pulse Report.

Average age increased by a month to over 58 months while average mileage fell to 78,000.

Values increased in the dealer part-exchange sector, but fell for fleet and lease and nearly-new vehicles. Performance against CAP average improved over the month by more than a point to 99%.

Year-on-year, August 2012 was marginally ahead of the same month in 2011 by just £19, although average age and average mileage had increased by 7.5% and 5.9% respectively. Performance against CAP slipped by over four points, year-on-year.

Monthly values in the fleet and lease LCV sector fell back to £4,844 in August from £5,029 in July. It is the lowest value recorded for a year, highlighting that seasonal pressures still have a part to play and performance against CAP dropped by a point to 98.6%.

Retained value against Manufacturer Recommended Price was static at 30.58%, although average age rose slightly. August 2012 was £193 (4.1%) ahead of the same month last year – despite the average van being both older and higher mileage this year.

“However, little has changed in the wider marketplace. Buyer confidence remains fairly fragile and trade buyers are looking for a quick turnaround and often buying to order, rather than speculating on vehicles. This results in the very best retail vehicles often making exceptional money, while vans in poor condition may struggle for attention.

“The market remains short of good quality, ready to retail used vans, and this is set to continue for some time to come.

“Writing in BCA’s 2012 Used Car Market Report, Professor Peter Cooke suggests there is a potential shortfall of some 375,000 first-time used LCVs in the marketplace, as a result of the low new LCV volumes since the onset of the recession in 2008.

“The effects of this are already being felt but will hit hardest in 2013 and 2014 when replacement volumes reaching the used market from the fleet and lease sector will be exceptionally low.”

Part-exchange values recovered in August, improving by £81 to £2,784. CAP comparisons improved by over a point to 99.93% and have risen by over three points in the past two months. Year-on-year values remain well ahead, however, by £258 or 10.1%, with age and mileage both higher in 2012.

Nearly-new values fell by £234 to £10,984. As always, this has to be taken in the context of the very low volumes reaching the market and the model mix factor. CAP performance fell to 100.72%.