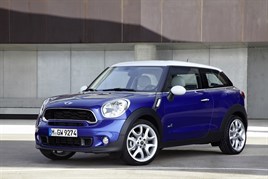 A sporty new exterior design, lowered suspension for a dynamic ride on the all-new Mini Paceman, set for UK launch in March 2013.

Styled as a coupé interpretation of the Countryman, four versions will be available when it arrives in showrooms next spring, including the Mini Cooper S Paceman which will have a 0-62mph of just 7.5 seconds. The seventh unique member of the family, it will sell alongside the Hatch, Clubman, Convertible, Countryman, Coupé and Roadster.

Packed with Mini character and obvious design cues which tie it to the rest of the range, the three-door Paceman’s unique exterior styling is what immediately catches the eye. Built on the Countryman platform, bumper to bumper the car is 4,109 mm (4,115mm for MINI Cooper S Paceman and Cooper SD Paceman), which makes it almost identical in size to its sibling.

The Paceman is a strict four-seater, though practicality has not been sacrificed. Folding down the rear seats expands the rear load-carrying capacity from 330 litres to a maximum of 1,080 litres. Access is via a large and high-opening tailgate, offering extra practicality for owners.

From launch, Paceman customers will have the choice of four four-cylinder engines, two petrol and two diesel. All come with a six-speed manual gearbox, or the optional six-speed automatic with Steptronic function for manual control.

For those who prefer diesel, the Mini Cooper D Paceman uses a 1.6-litre 112bhp turbocharged engine with a 0-62mph time of 10.8 seconds. It will provide owners with a frugal 64.2mpg fuel economy and 115g/km emissions. The flagship diesel is the MINI Cooper SD Paceman, which gets a 2.0-litre 143bhp engine. Its 0-62mph time is 9.2 seconds. Fuel economy is 61.4mpg with an emissions figure of 122g/km.

For buyers who want the reassuring grip that comes with four-wheel drive, Mini’s ALL4 system is available on the Cooper D, SD and Cooper S Paceman, models. And for those seeking the ultimate in Mini performance and desirability, a John Cooper Works Paceman version is in development.