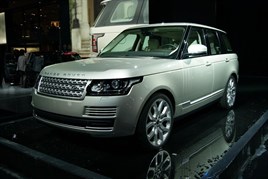 It is one of a number of innovations employed by the company to reduce CO2 emissions and improve fuel efficiency. Among them is the use of lightweight materials, including an all-aluminium body, which has reduced the weight of the car by 420kg (39%) yet improved the stiffness.

Land Rover bosses have set an ambitious aspiration for the fourth-generation Range Rover: not just to be the world’s finest luxury SUV but to be its finest luxury car, period. The company has invested 1.3 billion euros (£1.03bn) in the product, including a substantial amount in the manufacturing facilities.

According to John Edwards, Land Rover global brand director, ride and handling have been “transformed”, despite higher ground clearance, resulting in a “step change in comfort, refinement and handling’.

The Range Rover has a similar footprint to the outgoing model although rear legroom has increased by 118mm. This could boost its appeal in the chauffeur sector.

The design is softer, with more rounded edges bordering the bonnet, but the car retains recognisable Range Rover DNA and its presence on the road.

Driver aids include blindspot and forward sensors/warnings, adaptive cruise control with queue assist, which will bring the car to a complete standstill from motorway speeds, and reverse traffic detection sensors, which warning of approaching objects.

While the car is largely a retail model, Land Rover reports considerable interest from the fleet sector, including one company which has placed an order for 26 models. In total, the Range Rover has received more than 1,400 orders.