Larger Skoda Octavia due in March 2013 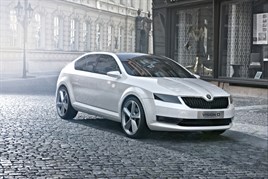 The all-new larger Octavia will be unveiled at the Geneva Motor Show in March, going on sale later than month.

The car, with design influenced by the Vision D (pictured) concept first seen at the 2012 Geneva Motor Show, will fill the top end of the family car segment, allowing the new Rapid to accommodate the lower end.

Meanwhile, the Superb, which gets facelifted next year with new face and a back end that resembles the Rapid design, will be fully replaced in 2014/15 as a slightly larger model.

The move to split what’s commonly known as the ‘C-segment’ with two models – Rapid and Octavia – mirrors the general Volkswagen strategy, according to Skoda director Alasdair Stewart.

“Volkswagen puts a foot in and then widens its footprint in the sector,” he explained, adding: “We will see this approach in other parts of the Skoda line up.”

The pricing guides will play a key role in helping Skoda to get its model mix right on the Octavia, particularly on specification.

The car will sit on the new MQB platform, which is 100kg lighter than the current chassis. Consequently CO2 will be markedly reduced through this policy of weight reduction, which includes using new composites and hollowing out components.

“Skoda will take a big step forward in the fleet sector 2013 with the Octavia and Rapid,” said Stewart. “We want double digit growth next year, focusing on the true fleet of local business and medium-sized fleets.”