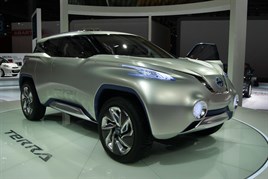 The Nissan Terra SUV concept has been unveiled at the Paris Motor Show and combines a 4x4 fuel-cell electric powertrain and an athletic exterior that has presence beyond its compact dimensions.

Powering the front wheels is the electric propulsion system currently featured in the Nissan Leaf. In each back wheel, providing all-wheel power as needed, is an in-wheel electric motor, based on the working prototypes featured in three successive PIVO concepts.

Nissan GB managing director Jim Wright confirmed the company was exploring alternative fuels beyond battery powered vehicles and suggested the Terra’s hydrogen fuel cell with a front-mounted electric motor under the bonnet with wheel hub motors at the rear would be a feasible way of packaging an electric 4x4 in the future.

Terra is purely a concept car, but it signals that Nissan is ready to mass-produce fuel cell electric vehicles whenever hydrogen becomes widely available.