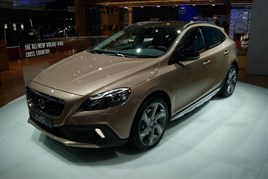 The launch of the new Volvo Cross Country is set to broaden the V40’s appeal in the UK offering a hatchback with the benefits of a higher ride position with hopes to capitalise on the growing SUV market.

The Cross Country is the third variant of the V40 to be revealed with UK sales predicted to be 1200-1500 in the first full year which the manufacturer expects to be predominantly made up of retail.

Nikki Rooke, head of public affairs, events and sponsorship at Volvo said; “The new Cross Country is ideal for those who are looking for hatchback space with something a little different, we are expecting the Volvo to sell well in retail but there is currently no fleet allocation.”

The new V40 Cross Country boasts emissions from 99g/km and fuel economy of 74mpg with an array of firsts for safety technology including City Safety auto-braking technology, the V40's world-first pedestrian airbag and Pedestrian Detection technology, a first for its class.

"The V40 Cross Country retains its V40 stylishness by integrating the ruggedness in the design with meticulous attention to detail. It has an extrovert, expressive character that promises the open-minded adventurer a great time," says Simon Lamarre, exterior design manager for the V40 Cross Country.

Prices will be announced and orders taken in early October, with production starting in November.  Customer deliveries are expected to start during January 2013.