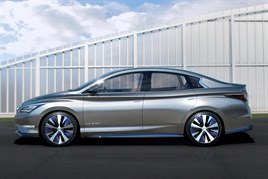 Infiniti is to reveal its all-electric concept car at the Paris motor show with a production version due in two years’ time.

Bernard Loire, vice president of Infiniti Europe, Middle East, India and Africa, said: “The Infiniti LE Concept is a ‘production intent’ concept and most of what you see will become a reality.

“It is too early to confirm exactly when and where it will go on sale, but we are heartened by recent moves to encourage electric cars, such as France raising the purchase incentive from €5000 to €7000 (£4,000 to £5,500) per car. It is fitting that the LE Concept should make its European debut in Paris.”

Infiniti is keen to stress that, with a four-door saloon body, the concept looks like luxury vehicle rather than an electric vehicle. And at 4.7m long, the concept is not a small car.

The lithium-ion batteries are placed under the floor to contribute to a spacious cabin and lower the centre of gravity, improving handling. The high performance electric motor with 136bhp combined with 238lb-ft of torque will result in impressive acceleration while giving an expected range of around 100 miles.

Intelligent park assist will automatically align the car over the charging pad for optimum charging allowing the driver to walk away without having to connect any cables. The charging can be controlled through the car’s display or by smartphone.

Loire added: "A luxury car for a new generation of sustainable luxury buyers must not compromise on performance. Buyers want ‘green,’ but won’t settle for any aspect of the driving experience being less than that of their current luxury vehicles."