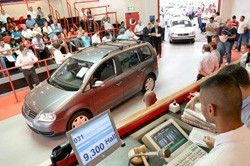 As the SMMT reports a 0.1% growth in new car sales in August and a 3.3% increase for the year to date, British Car Auctions (BCA) has released its used car sales data for the month.

Used car values in August were £270 or 4.5% ahead of the same month last year, despite the cars sold being on average older and higher mileage.

BCA attributes much of this year on year increase to a general shortage of good quality vehicles for sale. Across the board, used cars averaged £6,158 in August, down £22 compared to July, which BCA believes was largely as a result of a change in model mix, as lower value part-exchange cars represented a slightly bigger percentage in August than the previous month.

Average fleet and lease car values in August improved by £101 compared to July to reach a new record monthly value of £8,154.

Year-on-year, the fleet and lease sector has posted double digit improvements for three months running. Average part-exchange values increased by just £2 compared to July, but this also established a new high point of £2,951 and year-on-year figures are well ahead. Nearly-new values also posted a small improvement.

“But the short term prospects suggest that volumes will rise from mid-September onwards. This traditionally exerts some pressure on average values and conversion rates and that could be even more pronounced this year thanks to the continuing uncertainty surrounding the economy and the pressure on consumer disposable income.”