BCA reveals the highest value cars sold at auction in 2012 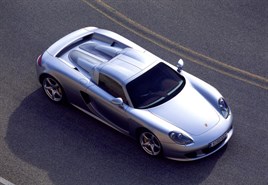 Big spenders were still out in force in the used car market last year despite the tough economic conditions, according to new data on the most valuable cars sold in 2012 by British Car Auctions (BCA).

The highest value car sold at BCA in 2012 was a Porsche Carrera GT which realised £197,000 last October.

The second highest value sale of the year was a Bentley Azure, one of three Bentleys in the top five, which went for £134,000.

The Top 100 most valuable cars sold by BCA last year were worth nearly £8 million combined.

“The 2004 Porsche Carrera GT is a true supercar, with its mid-engined V10 generating over 600 horsepower and a 0-60mph in 3.6 seconds,” explained Tim Naylor of BCA.  “They rarely come up for sale at auction and justifiably represent a hot ticket for bidders. The Bentley marque has regularly featured among our end-of-year best sellers, with the 2009 Azure 2-door coupe being a particularly desirable example.

“The Rolls Royce Phantom is getting relatively affordable as the 2007 example that sold for £113,000 demonstrates – Phantoms have sold for over £200K at BCA in recent memory. The Mercedes-Benz AMG was also a big seller in 2012, with three examples breaking the six-figure barrier.”

Naylor concluded: “The market for high value prestige vehicles remains buoyant despite the difficult economic conditions, with buyers are prepared to invest six-figure sums for the right vehicle.”