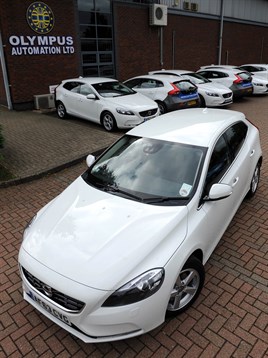 Olympus Automation, five years into a strategy of running one of the most socially responsible green car fleets in the food industry, has added ten brand new Volvo V40s to its fleet.

The Peterborough-based engineering business has chosen the vehicles for their efficiency and CO2 emissions of just 88g/km which perfectly complement their PDX range of products that deliver exceptional efficiencies in the food industry.

The V40s, which are all white and feature livery on the back, are to be used by Olympus Automation engineers who are expected to cover up to 30,000 miles a year travelling to sites.

With the V40s producing just 88g/km of CO2, Olympus Automation benefit from a 100% write down allowance in year one as part of new rules introduced by the government in April 2009 to incentivise lower CO2 company cars.

The cars have Volvo’s award-winning City Safety technology as standard, the system scans the road ahead for vehicles and automatically applies full braking power at speeds of up to 31mph if it detects a potential collision.

Initial driver feedback has been positive with Olympus Automation taking a V40 on trial before placing its order. The drivers have found the car enjoyable to drive and praised its comfort and economy, estimating a 30% improvement in real world economy in relation to its previous fleet vehicles, both vital on long journeys.

Olympus Automation CEO Harry Norman commented: “We’re delighted to have taken delivery of ten V40s to add to our fleet, Marshall Peterborough has been a pleasure to deal with and made the whole process easy.

“Company cars continue to be one of the largest sources of carbon emissions and improving it by up to 30% is great. Adding the optional safety features mean that we have done as much as we practically can to reduce the risk to our employees and the wider society.”

Marshall Peterborough business sales manager Bryn Dymott added: “It’s great to see that more businesses are starting to utilise Volvos in their fleet. The V40 is a versatile vehicle that is perfect for any business user and we look forward to working with Olympus Automation in providing their fleet and servicing needs.”