Toyota technology steers away from pedestrians 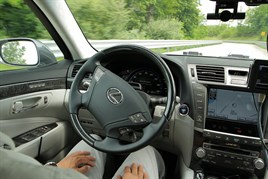 Toyota has revealed two new integrated safety systems designed to reduce the risk of pedestrian collisions and deliver safer driving in traffic, both of which will be brought to market in the next few years.

It has developed a new auto-steering function for its Pre-Collision System, which works in conjunction with automatic braking to help the driver avoid an impact, and Automated Highway Driving Assist, a system which keeps the car on an optimum driving line and a safe distance from the vehicle in front.

Toyota's Pre-Collision System (PCS) uses an on-board sensor to detect a pedestrian in the vehicle's path. If it determines there is a collision risk, it triggers a warning light on the dashboard, immediately in front of the driver; if the likelihood of an impact increases, it sounds an alarm to warn the driver to take avoiding action and initiates pre-collision braking force and automatic braking.

If the system detects that a collision cannot be avoided by braking alone, and there is sufficient room for avoidance, it activates steer assist to direct the vehicle away from the pedestrian.

In 2012 Toyota introduced the system with increased pre-collision braking force and automatic braking in the Lexus LS 600h, It aims to make the technology more affordable and more widely available in its model ranges by 2015, prior to bringing the PCS with Pedestrian-avoidance Steer Assist to the market.

Automated Highway Driving Assist links two driving technologies to help secure safer driving and reduce the workload on the driver: Co-operative-adaptive Cruise Control, which communicates wirelessly with vehicles ahead to maintain a safe distance; and Lane Trace Control, which helps steer the vehicle on an optimal driving line within a traffic lane.

nlike standard radar cruise control which uses millimetre-wave radar to detect other vehicles, Co-operative Adaptive Cruise Control uses 700-Mhz band vehicle-to-vehicle ITS communications to acquire acceleration and deceleration data from the vehicle ahead. This allows the speed of the following vehicle to be adjusted accordingly and better maintain an appropriate distance. By reducing unnecessary acceleration and deceleration, it improves fuel efficiency and helps reduce traffic congestions.