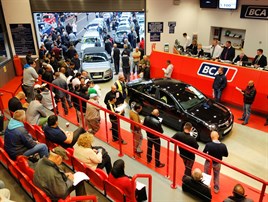 Average values continued to rise in the used car market in September according to BCA’s latest Pulse report, with both fleet/lease and dealer part-exchange values reaching record levels.

The used market remained relatively short of stock last month as much of the volume resulting from the September plate change does not impact until early October.

The fall in the headline value last month was a result of a small change in the mix of cars sold - a greater percentage of dealer part exchange cars were sold in September compared to relatively higher value stock from fleet  lease sources.

Average mileage continues to fall – down by around 1,500 miles compared to last year – while average age was static at just under 63 months.  Average performance against CAP Clean is 0.6% up, year-on-year.

Simon Henstock, BCA’s UK operations director commented: "September proved to be an exceptionally strong month at BCA, with a string of 100% conversions, high average values and an overall volume sales performance that was well ahead year-on-year. Despite volumes beginning to rise towards the end of the month, demand outstripped supply comprehensively throughout September and both physical and online channels were very busy.

"There has been a growing sense of general economic optimism over recent weeks and that feel-good factor has definitely been apparent in the wholesale used car markets. Availability of good retail-quality stock will remain critical, however, if dealers are to meet the needs of their customers.

"There is no doubt that the volumes generated back into the used sector from the September plate change will  rise during October and, while this means more choice for buyers, it will inevitably put some pressure on average values and conversion rates during the weeks ahead.

"We are already seeing an upturn in the supply of dealer part-exchanges at BCA, reflecting reports that retail sales have been strong in recent weeks. However, supplies of fleet and lease vehicles are likely to remain constrained, a consequence of the reduced new car sales to the business sector following the onset of the financial crisis in 2008."

Fleet and lease cars averaged £9,182 in September, achieving a record value for the second consecutive month. Record monthly values have been achieved seven times in the fleet/lease sector over the past 12 months.  Values improved by £184 (2%) compared to August and are up by £843 (10.1%) year on year. CAP performance improved for the fourth month running to 98.64%, while retained value against original MRP (manufacturers retail price) rose by a point to 42.93% across the fleet & lease sector at an average of 39.8 months and 44,700 miles.

Average part-exchange values also reached a record level, climbing by £118 (3.2%) compared to August – the fifth time a record monthly value has been achieved in 2013.  Year-on-year, values were ahead by £647 (20.7%) compared to September 2012 with average age and mileage both down slightly over the year. CAP performance improved by nearly a point to 97.3% in September.

Nearly new values fell by £1,005 in September after two consecutive monthly rises, while performance against CAP Clean improved to 101.0%. Nearly-new values will always be affected by changing model mix in this low volume sector, but the overall shortage of retail-ready stock is keeping values relatively firm.