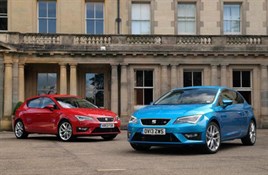 SEAT UK sold more cars during September 2013 than in any other month in its 28-year history.

The 8,498 registrations recorded in September 2013 a 9.8% improvement on SEAT's previous best ever month, which was September 2012.

The record-breaking month also caps off a stunning third-quarter (Q3) performance for the company, which is not only its best Q3, but its best quarter ever. Seat sold 12,716 cars between the beginning of July and the end of September - 421 more than it sold between April and June 2013, its previous record quarter.

Back-to-back record quarter sales follow the announcement of the company's best ever half year performance, set between January and June 2013 with 22,752 registrations.

Since the beginning of 2012, the brand has re-entered the city car segment, refreshed the Ibiza range, and launched the all-new Leon range.

And with order books for the third member of the new Leon family, the Leon ST now open, the firm is hoping for a record breaking 2013. The Leon ST is the first ever Leon estate car - the first C-segment estate that the brand has ever produced.

Seat UK director Neil Williamson said: "Breaking our monthly and quarterly sales records is of course fantastic news for us and keeps us well on track for a landmark year. We have a truly brilliant product range that combines outstanding quality with cutting-edge engineering and technology. But what really separates us out is the Spanish character that comes through in the design and feel of our cars - and that's something that people are really buying into.

"Having stunning cars like the new Leon on the road will always bring potential customers into showrooms, but backing that up with an entirely enjoyable ownership experience is what will sustain SEAT's long-term growth. We're constantly looking at ways of not only improving the products themselves, but refining the customer experience, both before and after a sale," he concludes.