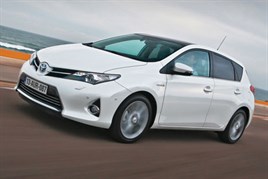 Toyota says it reaped the benefits of its comprehensive renewal of its core family market models in September with impressive results recorded by its Auris hatchback, Verso MPV and RAV4 compact SUV, all of which were launched within the past year.

In the year up to the end of September, sales of Auris petrol and diesel models have risen by 64.2%, while the hybrid version has seen retail sales soar by almost 250%.

Built in Britain, Auris is establishing itself as a main player in the heart of the market, supported by promising early results for the Touring Sports version. In September, the hybrid, petrol and diesel versions of the new wagon - another product from Toyota's Derbyshire plant - nudged the 650 mark.

The seven-seat Verso, which benefited from a full styling and dynamic makeover in late 2012, sustained the impetus in the market's central C-segment, with year-on-year sales rising by 32.3%, with growth divided equally between private retail and business fleet customers.

Larger, more efficient and more user-friendly than ever before, the fourth generation RAV4 has notched up a 66.9% sales increase in the first three quarters of the year, with fleet sales more than doubling thanks to the introduction of a 2-litre D-4D engine with stop and start technology, emitting 127g/km of CO2.

Outside the family car market, Aygo continues to dazzle: eight years on from its launch, Toyota's city car achieved a 5.6% increase in its sales figures in the year to date.