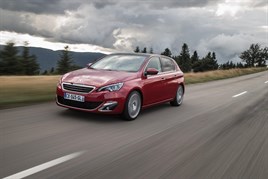 Residual Values projected for the New Peugeot 308 will be among the highest in the segment, based on figures released by industry expert CAP Monitor.

The data for September 2013 shows that Peugeot has made a huge leap forward, with values which are higher than several key rivals and the segment average. On average, RVs are 9.3 percentage points higher than for the outgoing 308.

CAP’s forecasts are based on cars which are three-years old with 60,000 miles.

Service, Maintenance and Repair (SMR) projected costs have also benefited. Service intervals across the range have risen from 12,500 to 16,000 miles. On a typical three-year / 60,000 mile contract the number of services drops from four to three.

The new 308 will be available from launch with a wide selection of petrol and diesel engines.

The most appealing for business drivers will be those powered by the 1.6-litre HDi 115 engine, with a CO2 output of just 95g/km.

With a Benefit-in-Kind (BIK) value of 13%, a 40% tax payer would contribute just £81 per month, a figure that’s again lower than several key rivals.

Bob Grant, Peugeot’s whole life cost manager, explains: “It’s a significant saving over a 36-month contract and it also has a knock-on benefit for employers who will see a reduction in Employer’s National Insurance contributions on the vehicle benefit.”

In this example, that cost would be £334 in Year 1, compared with £376 for an equivalent competitors model.

Another attractive proposition are the models with the new e-HDi 120bhp BlueHDi engine, with best-in-class emissions of just 82g/km and fuel economy at 91.1mpg.

Also the new 2.0-litre HDi 150bhp, which has expected emissions of only 103g/km – exceptionally low for an engine of that capacity, and will also be available mated to a fully automatic transmission with 111g/km emissions.

Business users doing lower mileage are also well served by Peugeot’s latest developments in petrol engine technology. From launch there will be a 1.2-litre VTi 82bhp with 114g/km, plus the 1.6-litre power-unit with the choice of 125 or 156bhp.

The most likely popular choice however will fall to the new 1.2-litre e-THP three-cylinder turbocharged unit, which is a superb performer, quiet and refined, with expected emissions from just 104g/km.

“The New 308 is the most competitive car we have ever launched because it combines so many virtues and a class-leading CO2 position,” added Grant.

“Weight reduction spearheaded by the new EMP2 chassis, many other weight-savings thanks to particular attention-to-detail features, improved aerodynamics and engine efficiencies are just some of the many highlights that have all contributed to this advantageous position.

“These competitive advancements and the overall attractive product design and high quality are the great influencers of the success of our Benefit-In-Kind and Whole Life Cost story.”

The New Peugeot 308 is now available to order in the UK, with first deliveries in January 2014.