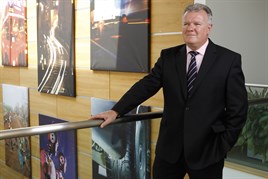 Leasedrive Group has confirmed to Fleet News that private equity group HG Capital is poised to become its majority shareholder in a deal expected to be signed by the middle of next week.

The leasing and fleet management company said HG Capital is in “advanced stages” of agreeing the deal with its current majority shareholder LDC, the private equity house that is part of Lloyds Banking Group. LDC paid £80m to take a 52% stake in the business in 2008.

The investment comes just weeks after HG Capital sold online trading platform Epyx to the owner of the Allstar fuel card Fleetcor, in a deal worth about £13m.

Fleet News understands that the current board – chief executive David Bird, commercial director Roddy Graham (pictured) and financial director David Foulds - will retain their shareholding in the business and will continue to drive the strategic direction of the Leasedrive business.

LDC is also believed to be retaining a ‘rollover’ share, a clear indication that it is expecting further growth in the business.

HG Capital has expressed a desire to be a major player in contract hire and leasing and is expected to make further acquisitions as it seeks to create a much larger organisation.

Leasedrive commercial director Roddy Graham told Fleet News: “They want to be a real powerhouse in the leasing sector.”

He added: “We have been looking for a new investor for a while, because LDC has been with us for four years, and we are delighted with this news. HG Capital wants to help us to move to the next stage of our development.”

Graham confirmed that Leasedrive non-executive chairman Peter Opperman, who was put in position following the LDC deal in 2008, would step down and be replaced by Jon Walden - like Graham a member of the Fleet News Hall of Fame.

“We are thrilled by his appointment,” said Graham. “We have known Jon for a long time and he has a lot of experience and knowledge of the leasing sector.”

HG Capital will be investing an unspecified sum – however, Fleet News understands that the £14.6m figure reported by Sky News this week as part of a £120m deal is not accurate. Further details about the deal will become available next week.

Leasedrive is the UK’s 14th biggest contract hire company, funding a fleet of 20,872 vehicles according to the latest Fleet News FN50.