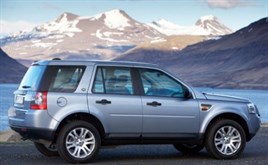 As colder weather kicks in there are more than twice as many searches on the AA used car website for 4x4s in South West London than in rural Aberdeenshire, Cumbria, Dorset, or Monmouthshire.

This follows an AA Populus poll that revealed last week that compacted snow and ice is the most feared weather condition for UK drivers.

More than half (54% including 20% extremely anxious) of drivers aren't confident driving in such weather.

This means that an estimated 15 million drivers aren't confident driving in compacted snow and ice.

While most 4x4s never go off road, they can be useful vehicles to negotiate potholes, tow boats or caravans or accommodate numerous passengers who like a better view.

However, with restricted parking, narrow streets and no congestion charge exemptions for 4x4s in SW London, it is perhaps surprising that their popularity is still so strong.

David Bruce, director of AA Cars said: "It is surprising that there are more searches for 4x4s in South West London than in most rural counties, from Cumbria to Cornwall.

"Some of this may be linked to the status of the 4x4, the state of the roads or the fact that a proportion of Londoners like to retreat to the countryside in their ‘Chelsea tractors' at weekends.

"It's even been claimed that certain Sloane Rangers used spray-on mud on their vehicles to pretend that they had been off-road.”