Benefit-in-kind (BIK) tax is now more influential than car specification and fuel economy when choosing a company car, according to ALD.

However, 2013 has seen a significant change in driver attitudes with BIK tax now being classed as the most influential factor (39%), followed by car specification (no change at 25%) and fuel economy (17%).

Commenting on the significant rise in BIK’s influence, Helen Fisk, AutoSolutions manager at ALD Automotive, highlighted the changes to BIK announced in the Budget (March 2013) as a turning point.

All low emission cars are now no longer exempt from company car tax and the maximum threshold has increased from 35% to 37%.

Also, the diesel supplement is to be removed from 2016 and, significantly, most drivers will see increased uplifts in BIK rates over the coming tax years.

Fisk explained: “Following the Budget we’ve seen BIK propelled to the top of the list of drivers’ priorities as they look more carefully at their opportunities to minimise their exposure. It’s clear that drivers are planning for future rises by selecting vehicles with low enough emissions to last a typical three-year agreement period. Even as the economy improves, maximising take home pay remains a priority for many company car drivers.

“Interestingly, it seems fuel economy is becoming less of an issue for drivers. This could be because drivers have become immune to higher fuel prices and are, therefore, switching to fuel efficient models with a lower BIK rate.”

Fisk concluded: “Company car drivers are typically the first-in-line to take action and react to changes in legislation, as well as adopting new models and technology from manufacturers, especially when it saves them and their company money.

"The results from our survey help us to carefully monitor changing driver demands and seeing how the influence of BIK has more than doubled in the last year only supports our advice to fleets that they must use a total cost of ownership programme to balance cost, flexibility and choice to identify the optimum fleet policy.” 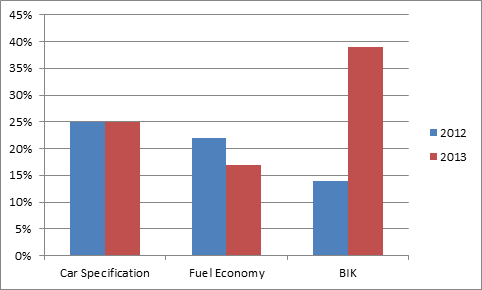