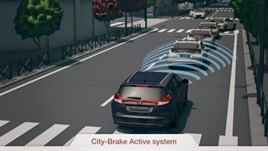 Honda is introducing a new suite of advanced active safety features, including laser-radar cameras and sensors, in British-built Civic models from 2014.

Both the new Civic Tourer and Civic hatchback will be offered with the new Driver Assistance Safety Pack, which will be a £780 option on all SE Plus, SR and EX Plus models.

The sensor-based technologies included in the pack help avoid a collision and Honda says ensure high levels of safety are affordable and accessible to a wide range of customers in the compact family-car segment.

Specifically designed to help avoid or mitigate low-speed accidents, City-Brake Active system is a laser radar system that scans the road ahead, automatically applying the brakes if an imminent risk of collision is detected. The system operates at speeds of 18mph or below, and is designed to detect cars and trucks.

When the system identifies a risk of collision, pre-braking with audible and visual warning will occur, followed by full autonomous braking. The system can be turned off by the driver only when the vehicle is stationary and it will remain off until the driver turns off the ignition. The system will come back on once the ignition is switched back on.

Forward Collision Warning detects the risk of an impact by recognising the vehicle (car or truck) directly in front using a multi-purpose, forward-facing camera. The system operates when the car is travelling at speeds of 9mph and above. On detecting the risk of collision, it will offer visual and audible warnings. The warning distance can be adjusted to the driver's preferences and the system can be turned off by the driver.

The High Beam Support System works at speeds of more than 24mph to switch High Beam headlights on/off automatically depending on oncoming / preceding vehicles (cars, trucks and motorcycles), bicycles and environmental brightness. The system can be turned off by the driver at any time.

Lane Departure Warning uses the multi-purpose camera to track lane markings on the road. If the car deviates from its current lane without indicating, Lane Departure Warning alerts the driver with audible and visual warnings. The system operates at speeds of more than 39mph where the road has a curve radius of 250m or more. The system can be turned off by the driver at any time.

Traffic Sign Recognition System uses the multi-purpose camera to detect road signs whenever the vehicle is moving forward. The system automatically recognises and displays the signs via the intelligent Multi Information Display (iMID) once the vehicle has passed the sign.

The Traffic Sign Recognition System can judge if a sign is relevant to the vehicle or not, and will only display it if it is relevant. For example, signs depicting speed limits specifically for Heavy Goods Vehicles will not be displayed. Traffic Sign Recognition System can be viewed through the dedicated page on the iMID or can be selected to appear below the normal display.

Honda's Traffic Sign Recognition System is different to competitors as it uses a camera rather than GPS which means the information is always accurate.

Blind Spot Information uses radar technology to automatically detect vehicles in the driver's blind spot, warning of potential dangers when the vehicle is travelling at speeds of more than 12mph. The system is designed to detect cars and trucks and can help to support drivers in situations such as passing other vehicles and merging or changing lanes.

Honda's Cross Traffic Monitor system uses rear-side radar sensors to warn the driver of approaching vehicles when reversing. The direction of an approaching vehicle is shown either on the rear-view camera screen, or displayed using arrows showing the direction of the travelling vehicle on the iMID accompanied by an audible warning. The system is designed to detect cars and trucks travelling up to 15mph, and can be turned off by the driver once the vehicle has stopped.