Ogilvie aims to be number one in Northern Ireland 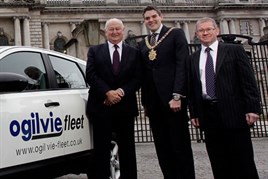 Ogilvie Fleet is investing £2 million in a bid to become the largest leasing company in Northern Ireland by 2015.

There are an estimated 15,000 company vehicles in Northern Ireland, of which around 10,000 are leased. Ogilvie is looking for a 30% share of the market within the five years, equivalent to 3,000 vehicles.

It currently operates a funded fleet of around 1,000 vehicles.

This means taking business from its three main rivals: Fleet Financial, which is now part of Lookers and has a risk fleet of 3,353 according to FN50 figures; Agnew Corporate, recently acquired by franchied dealer group Sytner, which has 3,500 vehicles; and DFC, which has 2,773 vehices.

“We want to be the number one leasing company in Northern Ireland,” said Nick Hardy, sales and marketing director, Ogilvie Fleet.

“We know we have a long road to get there.”

The Scottish-based business entered Northern Ireland in 2011, initially with the appointment of an area sales manager followed by the purchase of  Contraflex Contract Hire and Leasing’s corporate arm.

This acquisition included an office and four members of staff in Belfast, as well as 350 company cars and vans. The team has since grown to seven customer service and sales staff.

According to the 2012 FN50, Ogilvie Fleet’s overall fleet size for Great Britain and Northern Ireland is 10,350.

Hardy said it will take at least three years before the company starts to see a return on its planned £2m investment.

“It doesn’t frighten us but it would frighten many,” he said.

“We have invested a significant amount of money over the past two years and will continue to invest for the next three.