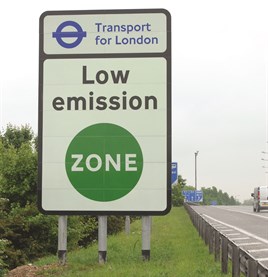 London could become a no-go zone for anything other than plug-in vehicles if Boris Johnson gets his way. The Mayor has announced plans to create the world’s first ultra-low emission zone in central London by 2020.

He has asked Transport for London (TfL) to prepare a feasibility plan on introducing a scheme that would aim to ensure all vehicles driving in the centre of the capital during working hours would be zero or ultra-low emission.

Johnson said: “This would deliver incredible benefits in air quality and stimulate the delivery and mass use of low emission technology.”

The existing Low Emission Zone (LEZ), which covers most of Greater London, was introduced in 2008 to encourage the most polluting heavy diesel vehicles driving in the capital to become cleaner.

To drive within it, without paying a daily charge, vehicles must meet certain emissions standards that limit the amount of particulate matter coming from their exhaust.

Johnson has described the original scheme as a success which has benefited London.

However, TfL has been forced to apologise to van operators who were incorrectly advised to change their vehicles because they broke new rules on emissions. It sent inaccurate information to businesses about compliance with changes to London’s LEZ which led to them replacing their vans needlessly.

So far, TfL has agreed to pay 35 complainants 15% of the purchase price of their new vans, but Fleet News has been contacted by other fleets caught up in the confusion.

One operator says he was forced to sell 30% of his fleet – 29 small vans – prior to rules governing the LEZ changing on January 3, 2012. “We’re still in the expensive process of replenishing this lost stock,” he said.

Another explained how TfL told him that he would have to pay £100 to continue to drive his van into the capital, because it didn’t meet new age, emissions and weight restrictions.

Renting a replacement vehicle at a cost of £1,800, six weeks later he discovered his van was, in fact, compliant.

However, TfL has insisted that only a “small number” of operators were affected and has set aside £40,000 to cover the 35 claims dealt with by the local government ombudsman.

“Unfortunately, in a small number of cases the information we were provided with was not as comprehensive as it should have been,” a spokesman said.

“As soon as we became aware of that issue we sought to correct the information.

“We have apologised to those affected and are working with them to ensure they are properly compensated.”

However, TfL told Fleet News that any other fleets which believe they were affected by this issue should get in contact with the authority.
Fleets that believe they’ve may be due compensation as a result of being advised incorrectly should call TfL’s contact centre on 0845 6070009 or email lezlondon@tfl.gov.uk.

Meanwhile, consultation on plans to tighten the rules governing the congestion charge, which could leave thousands of fleets out of pocket, has closed.

Transport for London (TfL) has proposed abolishing the Greener Vehicle Discount, which applies to cars with CO2emissions of less than 100g/km, and replacing it with a 75g/km limit.

The new rules, which will come into force in July if approved, will mean more than 50 models will no longer be exempt from the £10 charge.

Currently, about 70,000 motorists a day enter the congestion zone with 2,500 qualifying for the 100% discount.

The new limit would raise an extra £1m to £2m a year for TfL. It says the new rules would also sit alongside a £10 increase in penalty fines – taking them to £130.

Applications for the Greener Vehicle Discount would not be accepted from July. Drivers already registered would continue to qualify for the exemption until June 2015.