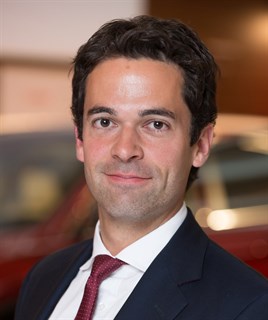 Glass’s will be targeting new business in the fleet and finance sector as it aims to increase competition for vehicle valuation.

Glass’s sales director Ed Hummel (pictured) admits the company, which is now in its 80th year, has relied on being strong in in the dealer sector and ceding other areas of the market to rivals.

The company launched its ‘second-generation’ values (G2) last summer in a bid to provide more accurate used vehicle values data, by taking account of the time a car or van spends between being sold to the trade and then advertised for sale to consumers.

Hummel, who was head of corporate sales at Honda when he was lured to Glass’s, has assembled a team that he hopes will give the company the push that it needs to ensure potential new customers are aware of the changes that have taken place as well as communicate some of the successes achieved so far.

The company has undergone a significant restructure in the past 12 months and has also recruited other key personnel to exploit areas for growth, including ex-CAP employees Dan Parnell and Steve Worrell.

Competition between CAP and Glass’s has become more intense over the past few months as former Glass’s managing editor Adrian Rushmore, who had been at the company for more than 25 years, left at the end of 2012 and was recruited by CAP as operations director.

Hummel told Fleet News: “We launched G2 pricing last summer. Although there were one or two teething problems to start with, recent benchmarking with our competitors in November and December has shown we are more accurate looking at the top 100 selling cars in the UK.

“We need to prove we can continue that performance and we need to start shouting about it.”

Although Glass’s may not have relationships with customers it is now targeting, Hummel says they are always open to having a conversation about what Glass’s could provide and that there is a great deal of goodwill towards the brand.

Glass’s has become a member of the BVRLA and has set up a number of partnerships, including with Autofutura, which provides a platform for leasing companies to produce their own residual values forecasts. Glass’s data on vehicles can be integrated into the leasing company’s own software, while the company would still use its own forecasts.

“It’s an exciting development and helps re-establish us in the fleet and leasing sector.”

He added that as some big leasing companies have operations in other European markets, the fact that Glass’s has presence in 27 European countries through its Eurotax parent company could result in bigger wins.

Vik Barodia, director of product management and marketing at Glass’s, said: “Accuracy of our data is very important. There is a huge change going through this business right now and we need to ensure we maintain the business that we’ve been traditionally renowned for as well as ensuring we are able to satisfy new customers.

“There is a momentum here and we’re moving in the right direction, adding value in all sectors.”

Hummel added: “We have 80 years of credibility and a strong background. We are now demonstrating how we are taking the business forward, and asking what the industry needs from us so we can deliver it.”