Audi switches on to digital radio 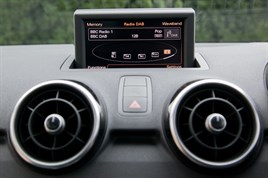 Already factory fitted to A8 models, digital radio reception is to become standard across most Audi ranges for the 2014 model year.

Digital radio also opens up considerably more stations to Audi owners – the official UK governing body Digital Radio UK estimates that on average most listeners will be able to receive 20 more in addition to their FM favourites.

As with household digital radio receivers, the system will not only display these station names when selected, but also the name of each track played and the artist or band performing it.

A programme of local transmitter builds is currently underway, giving listeners local stations on DAB digital radio for the first time, with a total of 14 new transmitters to be built by 2015.

Commenting on the upgrade, director of Audi UK Martin Sander said: "Quite simply, digital radio improves the ownership experience for our customers, not only in terms of the enhanced clarity and strength of its signal, but also the breadth of station choice and the degree of detail in the information it provides

" Our premium in-car audio systems, and especially our outstanding BOSE and Bang & Olufsen upgrades, richly deserve digital broadcast quality, and I am delighted that we can now offer it as standard in the majority of models."

Ford Ennals, CEO of Digital Radio UK, added: "This digital radio announcement from Audi demonstrates a huge industry transformation, with digital radio increasingly becoming the norm in new cars. This is significant news for new car buyers who can now enjoy the full range of BBC and commercial stations on the move."

Most Audi models equipped with fully integrated digital radio receivers will become available to order from the beginning of April, with the exception of the TT and R8 ranges, which will follow suit at a later date.