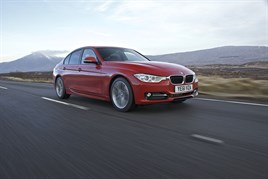 The new 3 Series was voted the best new company car by fleet operators, while BMW took the title of Fleet Manufacturer of the Year on its way to a total haul of four trophies.

The announcements were made at the 25th annual Fleet News Awards as the biggest ever ceremony in its history with more than 1,500 people in attendance.

BMW also picked up awards for the 3 Series and 5 Series in the Best Premium Car and Best Executive Car categories.

The new Mazda6 took the title of Best Upper-Medium Car, while the Skoda Superb estate proved it’s the Best Estate Car for the second year running.

Land Rover picked up two wins: one for the Discovery as Best All-Round 4x4 and another for the Range Rover Evoque as Best Crossover.

Vauxhall won the Best Full-Size People Carrier trophy for the Zafira Tourer, while the Nissan Leaf scored a victory in a new Ultra-Low Carbon Car category.

A panel made up of fleet industry experts as well as senior members of the Fleet News editorial team were involved in the lengthy judging process, chaired by former SMMT chief executive Christopher Macgowan and audited by Deloitte.

New Company Car of the Year and Fleet Manufacturer of the Year are voted for by fleet operator readers of Fleet News. The circulation database is used to allocate a code that allows voting only once to those who qualify.