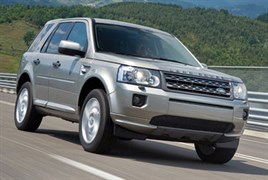 Analysis of used car sales from Experian has revealed that the biggest growth came from the 4x4 segment – an increase of 5.2% compared to 2011.

The most popular selling 4x4 was the Land Rover Freelander, which saw an increase in sales of 4.5%.  This coincided with a fall in sales of the used MPV.

Small cars (either the Ford Fiesta or the Vauxhall Corsa) have dominated the used car market as the best sellers since taking the top spot from the lower medium segment in 2007.

However, the used Ford Focus made its way back to number one with a 4.5% increase in sales during 2012, which pushed the Ford Fiesta into second place and the Vauxhall Corsa into third, despite both models also seeing an increase in sales of more than 1% in 2012.

Last year was also a successful year for used hybrid cars as sales increased by 47% during 2012 with the Toyota Prius, seeing a 35.% increase in sales in 2012.

Regionally, Experian's analysis shows the country is still divided, with those living in the North of England and Scotland preferring Vauxhalls.  By comparison, Ford was the brand of choice in the South East, South West, East Anglia, West Midlands and Wales.

The only region to buck the trend was Greater London, continuing its love for larger cars and opting for the BMW 3 Series as it car of choice with 26,579 sold.  This was a slight fall of 1.9% on 2011 figures with 27,106 sold last year.

Andrew Ballard, principal consultant, Experian Automotive in the UK and Ireland, said: "The latest analysis indicates that the 4x4 may be gaining weight in the family market as the MPV sees a drop in sales for the first time in over seven years.

"In addition, the significant growth in sales of dual fuel cars and, in particular the Toyota Prius, shows that motorists are increasingly keen to make greener choices with more of these models now in the used car market.

"By optimising their mix of stock to reflect changes in market trends and regional preferences, dealers can ensure they are in the best possible position to maximise all sales opportunities and meet customer demand."