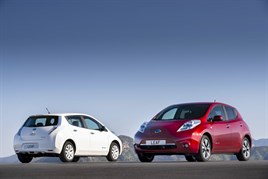 Nissan customers will be able to purchase a Leaf with a transaction price of less than £16,000 and a monthly battery lease of £70.

The revised model, which is built in Sunderland and available this summer, is available in three equipment grades and has a longer range than the outgoing model, but Nissan has also decided to give customers the option of leasing the battery and allowing a lower transaction price.

A new pricing structure has been introduced to reflect the three trim levels and the battery-leasing options now available – but things are far from complicated. Cars bought with leased batteries will be known as 'flex' models and buyers will be able to get behind the wheel of an entry-level Visia Leaf on that basis for £15,990 (after receipt of the Government's £5,000 plug-in grant).

The separate battery lease payment ranges from just £70 per month depending on the length of the contract and mileage covered (see below).

CAP has sais it would not provide residual value predictions for electric vehicles whjere the battery is leased separately, and does not provide forecasts for any Renault EV as all use the leased battery model, although Glass's sees merit in leasing batteries as it gives peace of mind to second owners as faulty batteries could be replaced free of charge during the lease period.

Nissan says the highest price anyone will pay for a Leaf is £25,490 (after receipt of the grant). This will be for a top-of-the-range Tekna, with the battery bought outright.

The car's maximum range has now extended from 109 miles to 124 miles, achieved by improving the Leaf's aerodynamics and its regenerative braking system and a more efficient powertrain.

The real world range has also been improved with the introduction of a new heating system which is 70% more efficient through the use of a heat pump in the system.

New interior trim, the addition of Nissan’s Around View Monitor technology and new suspension settings specifically tailored for European roads are among the changes for the British-built model.

The three equipment grades available to UK buyers are Visia, Acenta and Tekna. All models have increased boot space because of the relocation of the charging point. There is a height adjust facility on both front seats and more foot space for passengers.

At the top of the range, Tekna features a BOSE energy-efficient sound system with a subwoofer and seven speakers. In addition, there are 17-inch alloys and LED headlamps.

The warranty on the previous-generation Leaf's battery continues and covers it against defective materials or workmanship for five years. The extended warranty also protects against capacity loss, with a commitment to repair or replace a battery which falls short of what might reasonably be expected.

Jim Wright, managing director of Nissan, said: "We are very proud of the new Nissan Leaf, which underlines our commitment to the future of electric motoring.

"With more than 100 improvements over the outgoing model, it really does mark the next stage in the electric motoring revolution. Built at our record-breaking Sunderland plant for British drivers using British roads, we're looking forward to it becoming our next home-grown success story."