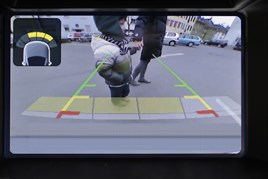 Ford's fastest-growing driver assistance technology of 2012 was the rear view camera that helps drivers with reversing manoeuvres including parking.

Ford also sold more than 100,000 vehicles in Europe equipped with Active Park Assist, the second best-selling aid, which helps drivers parallel park at the touch of a button, and without touching the steering wheel.

"Before GPS, you had to read a map or ask directions. Technology that was once unaffordable or far-fetched can now improve the lives of many."

Ford's rear view camera shows obstructions such as low obstacles, animals and children, on a screen in the instrument cluster or in the rear view mirror.

It debuted on the Ford Kuga in 2008; was introduced on Mondeo, Galaxy and S-MAX in 2010; and has since has been rolled out across Focus, Grand C-MAX, C-MAX, Fiesta and B-MAX.

Ford's Active Park Assist system, which was launched on Ford C-MAX in 2010 and is also available on Focus and new Kuga, uses ultra-sonic sensors to identify suitable parking spots. Active Park Assist automatically steers the vehicle while the driver controls the gears, throttle and clutch.

"Our driver assistance technologies really do make a difference in day-to-day driving." added Kellerwessel. "We're committed to democratising these features and making motoring less stressful for ever increasing numbers of customers."