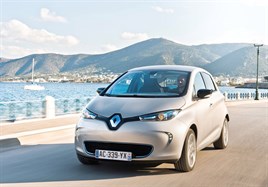 Fleet News can reveal that although Renault leases batteries to EV customers to help reduce the transaction price of electric vehicles and make them more competitive, the cost of batteries must be included in P11D calculations.

Drivers using an electric company car do not have to pay BIK tax at present as the vehicles are subject to a five-year BIK tax holiday announced in the 2010 budget.

But from the 2015-16 tax year ultra-low carbon vehicles will be subject to BIK at a rate of 5%. For Renault EV drivers it means their P11D will be based on the price of the vehicle, adding the plug-in car grant (PICG) and the cost of the battery (including VAT).

BIK tax would then be calculated at 5% of the P11D value as electric cars qualify for the ultra-low carbon rate.

The battery cost would also have an impact on employers' National Insurance contributions, with the Class 1A NIC based on 13.8% of the tax liability including the battery.

To date none of the used car value guides have taken account of the cost of the battery when setting residual values for Renault electric vehicles, only the value of the car before the PICG discount is applied.

CAP does not currently offer residual values forecasts for vehicles where the battery is leased separately, and was pessimistic about this presenting a further obstacle to businesses that might be considering electric cars on their fleets.

CAP manufacturer relationship manager Martin Ward said: "This adds an extra layer of complexity to something that was already complex. It might not matter so much to retail customers, but it increases the amount of BIK tax drivers might be expecting to pay in the future.

"There would be implications for how used values are presented if they have to be based on the full cost of the vehicle.

"But anyone considering choosing a Renault electric car needs to consider all of these issues now as they will still be running them when these payments take effect."

Andrew Wright, senior analyst - global services at Glass's, said: "If you're taking the plunge and choosing an electric vehicle it does seem counter-intuitive that procuring it would be made easier on the one hand with a grant and a leased battery, but punitively taxed on the other."

A Renault spokesman told Fleet News: "The BIK treatment for the Renault ZE range and battery lease has been in the public domain since July last year.

"We do not agree with the comment from CAP that this provides any additional complexity."

Fleet News recently reported that Renault hasn't ruled out selling EVs including the battery, and Ward suggested this would make life simpler for Renault, putting it on the same terms as other EV manufacturers.

However, if Renault was to change its leased battery policy, it would be five years away.