Best ever March market for Mercedes 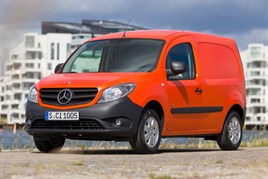 Mercedes-Benz UK and its dealer network have achieved their best-ever record-breaking registration performance, according to figures from the SMMT.

March topped a record-breaking quarter for the company, as 28,698 new cars were registered in Q1, which was 13.2% more than the first three months of last year. The quarterly result eclipses the previous record, set at the end of 2012, by 2,700 cars.

Marcus Breitschwerdt, president and CEO of Mercedes-Benz UK, said:  "More new and returning customers than ever before are choosing to drive a Mercedes-Benz, and that's great news for them, and the thousands of dedicated people we've got all over the country who work so hard to achieve these extraordinary results.

"Everybody's hard work and effort is paying off.  Making our attractive, exciting, affordable premium cars appeal to ever-more people is our mission and it's a mission we're continuing to meet head-on."

Mercedes-Benz vans rallied to a strong performance in March, with registrations increasing by 3.8% to 5,888 units.

Breitschwerdt added: "It's encouraging to see that our vans division is delivering great results, and the first figures from our compact Citan show it is supporting the success of our established Vito and Sprinter vans."