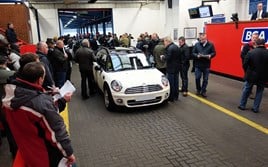 Although the economic climate continues to bite, demand for retail ready de-fleeted cars is still strong, according to Manheim’s latest market report of the wholesale vehicle market.

The ex-fleet vehicle market remained steady during March despite a spike in age and mileage.

In fact, even with the rise to 52 months in age and the hike in average mileage of an additional 2,186 miles, the average selling price only dropped by £106 or 1.5%, reports Manheim.

It reports that CAP performance fell by more than a point to 97.6%, while retained value against original MRP (Manufacturers Retail Price) fell slightly to 42.5% across the fleet and lease sector at an average of 40 months and 46,000 miles.

Year-on-year, the fleet and lease sector recorded a significant £939 (12.0%) uplift, while average age and mileage were virtually static month-on-month, but down year-on-year, says BCA.

However, Manheim’s March figures reported a 4.2% increase in the average value of vehicles year-on-year, with a number of impressive individual niche performances during the same period.

For example, 4x4s showed an 11.3% growth and executives an extraordinary 21.5% growth over the past twelve months.

Meanwhile, Manheim’s unique monthly measure, expressing today’s auction prices as a percentage of their original retail price, showed a slight dip in values, dropping by one per cent to 35% during March.

Average retained values of ex-fleet vehicles reached an all-time high of 36% of their new price in February but, clearly, the small rise in vehicle age to 52 months and the increased mileage have played their part in this decrease in value from February to March.

Daren Wiseman, valuation services manager at Manheim, said: “The retained retail values of ex-fleet stock going to auction continues to remain strong as we reach the end of first quarter of the year.

“Ex-fleet vehicle values have continued to maintain an average value of 35% over the last twelve months, fuelled by strong average selling prices.

“Looking forward, fleet managers must ensure their remarketing supply chain is as efficient as possible. Getting cars retail-ready quickly and cost effectively will help them to realise best wholesale values are reached at auction.”

Looking at the performance of vehicle segments in more detail, March saw selling prices drop in seven of the 10 niches, according to Manheim.

Most significantly, compact executives decreased by £812 or 9.8%, while supermini models fell by £378 or 7.9% during the month.

The largest increase in values was recorded by executive models, increasing by £1,097 or 9.4% during the month.

Simon Henstock, BCA’s UK operations director, concluded: “With volumes increasing quite significantly in March, we saw pressure on conversion rates and a notable reluctance for trade buyers to bid as strongly on poorly presented vehicles.

“Cars requiring any significant degree of cosmetic work have been hit the hardest and need to be sensibly valued – or pre-sale Smart Prepared - to attract the buyers’ attention.

“As we are now in the post-Easter period, the dynamics of the wholesale markets are changing.  Typically this time of year brings a softening in demand combined with an upswing in supply, so we expect to see continuing pressure on values and conversion rates in the weeks ahead.”