RAC aims to re-establish itself as major fleet player 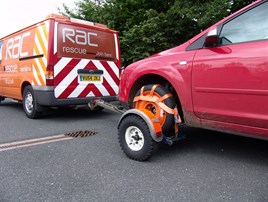 The Carlyle Group is aiming to get a return on the £1 billion it paid for the RAC by re-establishing it in the fleet sector as a provider of accident management and fuel card services.

The roadside recovery specialist has launched a flurry of new products in the past few months to broaden its sevices and gain traction in the market.

It is targeting fleets through a deal struck with Towergate Insurance and offering fuel cards and a web-based fleet management tool, following a multi-million pound investment (Fleet News, March 21).

A further £2 million has been spent on a new IT platform for a new accident management service, which was launched last week. It is aimed at large fleets.

The strategy is a reinvention for the RAC which languished in the fleet sector under previous owner Aviva. It sold the company to American private equity company Carlyle Group in June 2011.

Jim Monteith, head of accident management, told Fleet News: “Prior to Aviva’s tenure, the RAC had a prominent place in the fleet sector.

“For several years, however, growing accident management services was not a core objective.

“Under the stewardship of The Carlyle Group, accident management is seen as one of several growth areas, hence the significant investment.”

The Carlyle Group was founded in 1987 and initially developed a reputation for acquiring businesses related to the defence industry. In more recent years, it has turned its focus further afield.

For example, in 2005, Carlyle joined forces with two other financial institutions to complete the $15bn (£10bn) buyout of Hertz from Ford.

According to a 2011 ranking called the PEI300 based on capital raised over the past five years, Carlyle was ranked as the third largest private equity firm in the world. It had been ranked first in the 2007 listing and as of December 31, 2012, it had $170bn (£110bn) in assets under management.

When it bought the RAC, Andrew Burgess, managing director of Carlyle Europe Partners, recognised that it had a “great opportunity to enhance the roadside business” in the corporate sector.

However, roadside assistance decisions are dominated by the leasing companies who default to the manufacturers’ recommended supplier during the approved term, usually one or two years, and then switch to their own preferred partners. Few fleets choose to unbundle the process and appoint their own suppliers.

Consequently, the RAC is instead beefing up its accident management operation with a raft of senior appointments.

Monteith joined the business last year. He has worked in the accident management sector for 20 years, including six as managing director of Fleet Accident Repair Group and, more recently, as automotive director at Ai Claims Solutions.

He said: “The £2m investment in an IT system called ICE Claims, coupled with the recruitment of experts from within the industry, has resulted in a number of key benefits aimed at facilitating an efficient and cost-effective solution for the RAC and its customers.”

They include fast-tracked repairs, which will reduce downtime and help fleets keep a tight rein on costs.

The RAC has also secured strong commercial terms in its supply chain for the new accident management service and will be passing those savings on to fleets.

Repairs are carried out by a nationwide network of 150 RAC approved repairers. The RAC scrutinises repair estimates and underwrites all repairs for three years, while the new IT system will enable customers to view claims updates online.

RAC chief executive Chris Woodhouse said: “It is important for the RAC to support all our business and corporate members with the same solutions-driven approach we do our individual members.

“We have brought our extensive fleet management experience and buying power to the design of this new service.

“Customers get on with running their business or fleet and we sort out getting their vehicles and drivers back on the road quickly, safely and at minimum cost.”