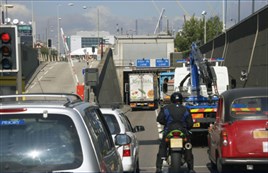 Transport for London (TfL) and the Vehicle Operator Standards Agency (VOSA) have signed a Memorandum of Understanding for closer collaboration and data sharing as part of their ongoing work to reduce the impact of dangerous and unroadworthy vehicles in London.

The agreement, which was today signed by London’s Transport Commissioner Sir Peter Hendy and Heather Cruickshank, director of operations at VOSA, will pave the way to allow TfL to provide details of every commercial vehicle involved in breakdowns and over-height collisions within Blackwall Tunnel to VOSA.

Currently, TfL write to the owner (rather than the driver) of a commercial vehicle that causes an incident within the Blackwall Tunnel.

However, this is only possible where the owner’s details appear in the livery of a vehicle, which often only occurs in a handful of cases.

By providing the vehicle details to VOSA, more direct and appropriate action can be taken against the owners of these vehicles.

This can range from future enforcement activity to referral of the operator to the Traffic Commissioner, helping to further change driver behaviour across London.

In additional, TfL has invested in a new site office on the Blackwall Tunnel Northern Approach, which will be used by VOSA and the Metropolitan Police to carry out enforcement activity.

A new automatic number plate recognition (ANPR) and weigh-in-motion system has also been installed on the A2 to identify potentially overweight vehicles in advance of approaching the tunnel.

Since September 2011, officers from the MPS Safer Transport Command Roads Policing Unit have been permanently based at the Blackwall Tunnel.

This dedicated team provides an immediate response to incidents, such as breakdowns and accidents, occurring in or around the tunnel.

More than 3,000 vehicles have been inspected by officers in the last 20 months, of which more than 400 were found to be overweight.

Vehicles that are identified as potentially overweight will then be accurately weighed and inspected at the new site office.

Illegally overweight vehicles not only cause damage to the structure of the road, especially bridges and tunnels, thereby causing unnecessary disruption to road users, but also can severely damage the steering, suspension and brakes of the vehicle.

Removing overweight vehicles from the road network as quickly as possible will help further reduce the disruption these vehicles can create across London.

Sir Peter Hendy said: “Our new agreement with VOSA will allow us to work even more closely together than before.

“Traffic disruption and delays caused by unnecessary breakdowns or incidents are a pain for everyone, and this partnership working will help improve traffic flow on one of the busiest routes in the capital.

“Furthermore, by providing additional checks against illegally overweight vehicles trying to use the Blackwall Tunnel, we can increase our direct action against dangerous operating practices and improve the capital’s roads for all.”

Heather Cruickshank, VOSA director of operations said: “VOSA is pleased to be working with Transport for London to help target non-compliant commercial operators and drivers.

“Joint working with organisations such as the TFL helps VOSA work towards its aim of saving lives, cutting crime and protecting the environment.”