Mercedes-Benz registrations rise 16.5 per cent in May 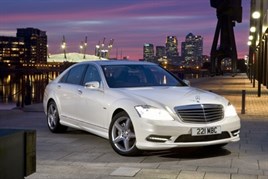 Mercedes-Benz UK has posted a record 16.5 per cent rise in registrations for the month of May according to figures released by the Society of Motor Manufacturers and Traders (SMMT) - adding to the momentum already achieved by a record first quarter, and a total year-to-date gain of 13.9 per cent.

Registrations totalled 8,326 cars in May - bringing the number of cars registered by Mercedes-Benz for the year-to-date to 44,615.

Highlights in May included strong performances by the Coupé and Roadster models - the C-Class, CLS-Class, E-Class and SLK-Class each achieving significant gains for the month. Likewise, AMG continued its record form - 1214 examples have been registered in 2013 attributing for a 52.9 per cent rise for the year-to-date.

In the month that saw the new S-Class being unveiled, the existing model retained top spot in its market segment - finishing May as the Number One luxury car, a position it's held all year.

At the other end of the scale, the Smart Fortwo posted a 78.9 per cent rise in registrations in May, adding to what has been a highly successful year so far for the Smart brand. A number of these cars will be used by Car2go customers, the car sharing service based in London and Birmingham.

A consistently popular model in the UK, the B-Class, maintained its strong performance with a 56.8 per cent rise in registrations in May, and YTD registrations of 2,965 cars.

Mercedes-Benz Commercial Vehicles registrations were also strong against a challenging market, with the Sprinter panel van achieving a 24.1 per cent gain in May - a total of 1,261 vans. The Sprinter range is up 9.3 per cent for the year while, the panel van version has posted a 15.2 per cent gain.

Marcus Breitschwerdt, president and CEO Mercedes-Benz UK, said: "A strong May and a record-breaking first five months, signs of growth in our Commercial Vehicles operations and another great performance by the AMG brand have put us in a strong position as we enter the summer.

"My colleagues and I at Mercedes-Benz UK and the sales and customer service teams at our passenger car Retailers and CV Dealers throughout the UK will continue to work hard to sustain and build on this progress. As we introduce new and exciting models to the UK - most recently the CLA-Class, the new E-Class and the new GL-Class - we are welcoming new customers to Mercedes-Benz, and along with those of our existing owners, we will meet and exceed their expectations."